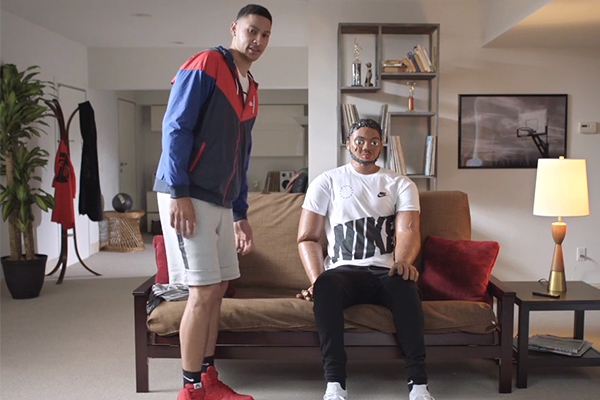 In the first spot “It’s Not Real Yet” – set prior to the Draft – Simmons produces his own, homemade Foot Locker commercial alongside a life-sized papier-mâché version of NBA star Karl Anthony Towns. Simmons asks Towns, “Any advice for my rookie year?” and role plays how he hopes the star would respond. The spot closes with an awkward handshake between Simmons and fake Towns, styled in head-to-toe Nike gear from Foot Locker.

The spots will air nationally on ESPN during the live broadcast of the NBA Draft 2016 presented by State Farm®. The spots are part of Foot Locker’s “Approved” marketing platform, created by worldwide agency BBDO.

“It’s awesome to get the chance to work with guys like Karl, D’Angelo and Devin, who just went through this process last year,” Simmons said. “It’s been fun to hear their experiences first-hand as NBA rookies, and even apply that humor to this campaign.”

In addition to starring in Foot Locker’s Draft campaign, Simmons will appear alongside other NBA prospects in Kids Foot Locker’s second-annual “Media Training,” to be released digitally later this week. The draftees will be put in the hot seat as kids ask hard-hitting questions to help prepare them to face the media as they embark on their NBA careers.